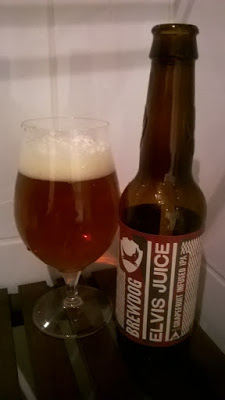 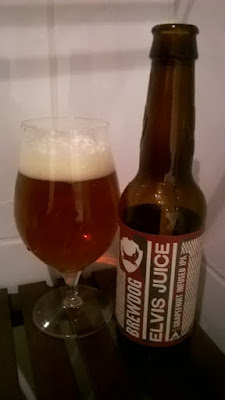 What about the beer?
Colour is clear orange with a two-finger thick white head. Aroma has fresh grapefruit, orange and pineapple. Taste begins with gently bitter grapefruit. Fresh grapefruit-lemon juice takes over with hints of sweet fruits. Towards the end sweet orange and bitter peel are added to the taste. Aftertaste has bitter grapefruit, sour lemon and salty-fruity dryness.
Grapefruit-orange-packed India Pale Ale. Completely fruit-dominated brew with very gentle bitterness. Craving a little more. Probably the name will change soon, so I’ll get it then. But this tastes good and fresh, anyway.

The name of the brew got BrewDog in a legal battle with Elvis Presley’s estate, and in July 2017 they lost it: BrewDog is forced to change the beer’s name. Because I don’t want to link the beer in any way to the King, he will not get his first song here. Instead, I picked this classic tribute to him.
Dire Straits: Calling Elvis (Vimeo)
From the 1991 album On Every Street, the song was written by Mark Knopfler.