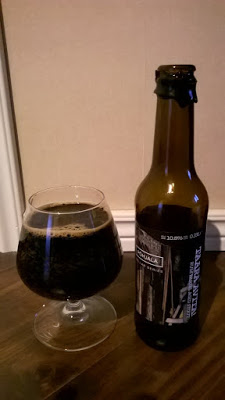 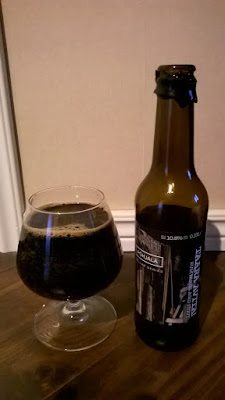 What about the beer?
Colour is black with a tiny diminishing beige crown. Aroma has sweet roasted malts, chocolate, coffee and booze. Taste begins with syrupy malty roast. Syrupy roast and sweet rye-bready malts take over with gentle bitterness. Towards the end syrup-sweet malts and roasty bitterness are accompanied by fruity sugary booze warmth. Aftertaste has sweet rye-bready malts, bitter roast and warming alcohol.
Excellent rum barrel-aged Baltic Porter. Sweet roast comes in front, rum and malts follow. I’ve actually tasted this great beer couple of times before it was ready to be reviewed the blog. But still it’s always nice to yell war cries with Estonian gods of dark brews a.k.a. brewmasters of PÃµhjala brewery.

The brew is named after an ancient Estonian war cry – or prayer, since avita! means ’help!’ – addressed to Taara, the Estonian god of war. Asking any god for help was a good enough reason to pair the beer with this song. And because the brew is black as the night(mare), there should be no place for objections.—
Black Sabbath: Black Sabbath (YouTube)
From the 1970 album Black Sabbath, the song was written by Tony Iommi, Geezer Butler, Bill Ward and Ozzy Osbourne.