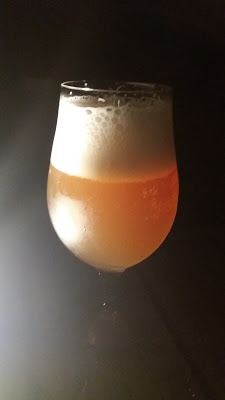 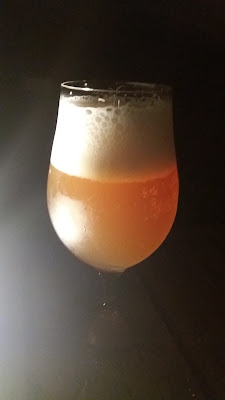 (I don’t usually write intros to Ölbeats but this and one upcoming post will be well-argumented exceptions.)
Around three-four weeks ago when the blog was slowly reaching the milestone of 300 Ölbeats, I seriously thought of writing a couple of—  ”Best of the Pest” posts and throwing in the towel after that. The time to keep up posting to the blog has been limited lately, and running again and constantly around 50 beers behind in the posts seriously bugs me. And there will be less time for the blog in the future, since I’ve found the interesting and important world of coaching kids to play volleyball.
At the same time with these deep thoughts running through my head, the fellow blogger Harri Metsäjoki from Reittausblogi, asked via Twitter whether I would like to have a taste of a couple of his homebrews, one being this IPA and another being a smoked bock that will be in the blog later. As a serious master of homebrewing Harri surely mastered the timing of his offer. Totally astounded, I pushed the thought of quitting the blog aside – ”Let’s think about that again at 400…” – and answered: ”Hellyeah.” Couple of weeks later I had a mysterious package in my shaking hands. Last Saturday, ) September 2017, I took the bottle from the fridge and poured it into the glass…

But before the review let’s give the word on the brew to the brewer himself:
Reittausblogi IPA 2017
India Pale Ale, 6,2% abv

This is my first homebrew recipe from back in 2013. This summer I wanted to be a little nostalgic so I brewed another batch with a recipe very similar to the first one, just slightly more hops and I used Citra instead of Centennial, because Centennial was out of stock.

I will not lie a lot if I say this recipe is one of the most brewed homebrews in Finland. I wrote the first easily understandable, but thorough, homebrew instructions in Finnish and they became a huge hit, maybe even being a somekind of spark to the current homebrewing wave that is sweeping over Finland. Along with the instructions came this recipe and a lot of people would start their homebrew careers with it. It is still unbelievable and crazy how popular it became and how popular it still remains.

The beer itself is a classic West Coast Style IPA with balanced hoppiness. Malt base is 100% finnish Sahti Malt from the Viking Malt company. Sahti malt is a barley malt mixture with roughly 90% of Pilsner malt and 10% Dark Ale malts. The exact mixture is a secret that the malt house will not share. Sahti malt is sold in 25 kg bags in local supermarkets and is therefore very cheap and the easiest malt to get hold of. And quite well suited to brewing IPA, at least in my opinion.

What about the beer?
Colour is hazy dark orange with a two-finger thick white head. Aroma has grapefruit, orange and mango. Taste begins with smooth piny fruity bitterness. Bitter grapefruit juice and sweet caramel malts take over with spicy piny side tones. Towards the end bitter pine and sweet citrus get mixed with the grapefruit, while caramel malt retreat to the background. Aftertaste is smoothly citrus fruity and biting piny bitter.
Great and flawless India Pale Ale. Grapefruit clearly leads the game, pine bites in just the right way, fruity sweetness gets nicely through and malts support the game beautifully. The brewer himself has once told that CCCCC IPA was the original brew’s role model – there surely are differences in the taste but both are excellent West Coast IPAs. Truly a homebrew worth the rep. This was a privilege. Huge thanks to Harri and Reittausblogi! We’ll continue with the bock later. 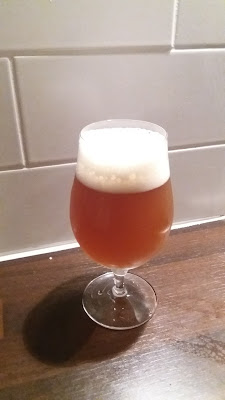 According to Harri, this great song from the toughest album of 2017 matches his homebrewing hobby well: old equipment, no automation and digital meters. The only digital instrument used while brewing is the kitchen scale.
Accept: Analog Man (YouTube)
From the 2017 album The Rise of Chaos, the song was written by Accept(?).

Encouraged by the brewer, I jumped right out the digital period to the time of classic rock. Since the beer was the first new Finnish IPA for me that truly rocked in a relatively long time – couple of months, at least.— —
Led Zeppelin: Rock and Roll (YouTube)
From the 1971 album Led Zeppelin IV, the song was written by John Bonham, John Paul Jones, Jimmy Page and Robert Plant.