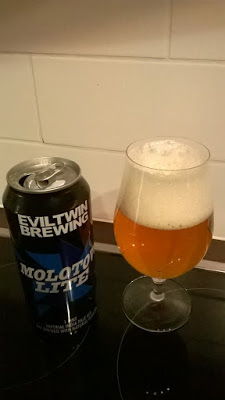 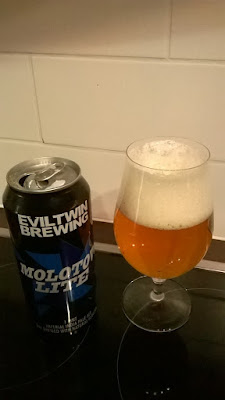 What about the beer?
Colour is flakey golden orange with a large white head. Aroma has dried fruits, caramel and candy. Taste begins with caramel softened fruity bitterness. Bitter grapefruit takes dominantly over with some sweet citrus in the background. Towards the end malty grapefruit is joined by piny elements and pineapple flavour. Aftertaste has strong piny-grapefruity bitterness and caramel-boozy warmth.
Slowly growing, eventually excellent Imperial IPA. Fruity bitterness hits its peak near the finish, the caramel malts round the strong flavour nicely. It seems clear that the darker twin is my favourite – with a narrow margin, though.

The beer is a little brother of the brewer’s Molotov Cocktail, a brew still to be tasted. Originally Molotov cocktail was the name of a petrol bomb used by Finns in Winter War 1939-1940. It was a ”commercially produced homemade explosive” for disabling Russian tanks. Molotov Lite is expected to be something smaller, so I picked this song.
Lorde: Homemade Dynamite (YouTube)
From the 2017 album Melodrama, the song was written by Ella Yeilich-O’Connor, Ebba Tove Nilsson, Jakob Jerlström and Ludvig Söderberg.