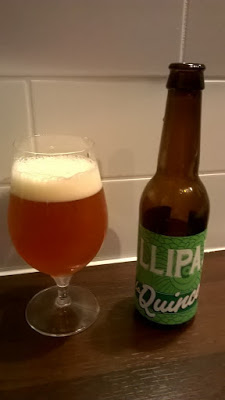 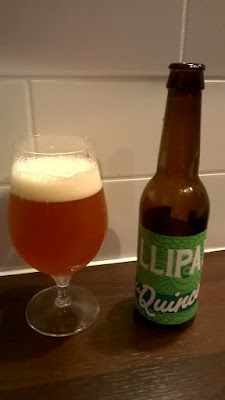 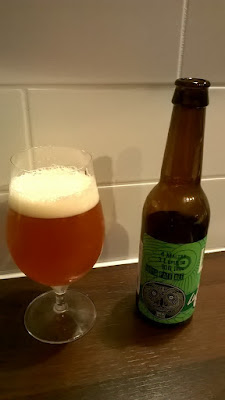 What about the beer?
Colour is hazy golden orange with a finger-thick natural white head. Aroma has grapefruit, lemon and kiwifruit. Taste starts with sharply biting grapefruit. Bitter grapefruit takes over with sour lemon and herbal spice. Towards the end herbal pine rises in the line with grapefruit, some sweeter citrus lingering to the background. Aftertaste has strong grapefruit bitterness and lasting piny dryness.
Pretty tasty and rich India Pale Ale. Bitter grapefruit dominates, lemon, pine and herbs play important side roles. Texture has a malty backbone, but the beer goes down nicely. A Spanish version of CCCCC, perhaps? This works absolutely beautifully.

Actually it the comparison to CCCCC that got me to select the band, the album and finally the song. Both the band and the brewery have been in Finland within a week: Guns N’ Roses had their pension money fu… err, Not in This Lifetime tour gig in Hämeenlinna last weekend, and La Quince brewery is in Helsinki in Craft Beer Helsinki and a pre-CBH happening this week. Pure coincidence?—
Guns N’ Roses: Welcome to the Jungle (YouTube)
From the 1987 album Appetite for Destruction, the song was written by Guns N’ Roses.