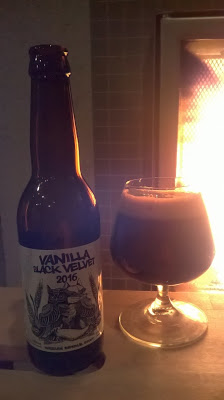 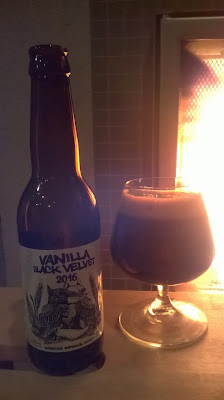 What about the beer?
Colour is black with a two-finger thick beige head. Aroma has roast, espresso, chocolate and vanilla. Taste starts with bitter roasted cocoa. Spicy roasted malts and bitter-boozy espresso take over with dark chocolate. Towards the end bitter dark chocolate and strong vanilla push the other flavours back. Aftertaste has piny-boozy bitterness and roast-cocoa dryness, and it lasts long.
Delicious spicy Imperial Stout. Chocolate malts and Madagascar vanilla really show up in the taste that has roast, espresso and bitterness of a quality impy. Though this is a collab with Cervesa Guineu, the brewers of La Quince impressed me with their brews and got me seriously interested in Spanish breweries.

No, Alannah Myles will never make an appearance on this blog. Since no beer can actually be velvet, they can only imitate it. Like in the world of fabrics velveteen does.
Lenny Kravitz: Black Velveteen (YouTube)
From the 1999 album 5, the song was written by Lenny Kravitz.