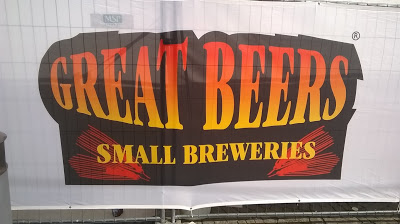 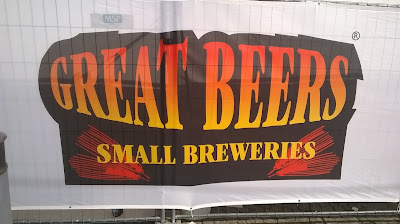 Only in Finland one can give a beer festival an unimaginative name like Suuret Oluet, Pienet Panimot – that’s Great Beers, Small Breweries in English. Check the pictures below, if you don’t believe. Luckily, the festival is known by its abbreviation SOPP, and the name is probably only thing that’s completely wrong with the event. If we try to forget that everything and a little more is wrong with beer festivals.
The SOPP festivals are organized by Lammin Sahti, best known as a Finnish sahti brewery. The main idea is to have couple of Finnish microbrewery assemblies around Finland during the summer. Traditionally and also in 2017, the tour starts in the end of May in Tampere. Next in the turn of June and July is Lahti – the original city of the event since 2002. Then, in the end of July, the festival hits Jyväskylä first and the next weekend it’s time for the ”main SOPP” in Helsinki. Turku gets its festival after a couple of years’ break in the middle of August, and the newcomer Oulu is last in the beginning of September. Every festival lasts 3-4 days, so there are plenty of chances to attend the event. I wonder, how I’ve managed to avoid the event so far.
But because Thursday the 25th of May was the Ascension day and the next Friday was a clear out-of-office day, we – the neighbour gaffer and I – had decided to have a non-family trip to Tampere. We arrived to the venue one hour after the opening at 1 p.m. – to avoid the entrance fee (from 6 p.m. 10 â‚¬) and the evening crowd. After choosing and buying a decent beer glass with 4 â‚¬ – not the thick traditional pint and not the ”Excuse me, I’m a craftbeer hipster” one deciliter tasting glass – we got our rally started with a handful of other people. No waiting lines in sight – great!
Each of the 30 breweries present had their stand inside the U-shaped serving tent area. The breweries had different number of their beer brands available on tap – some had 3-4, others 6-8. Altogether there were over 200 different brews in the event. There were three kind of serving sizes available: 4 deciliters’ ”large” (7-8 euros), 2 deciliters’ ”small” (3-4 euros) and 1 deciliter’s ”miniature” (1,5-2 euros). Also, there were bottles to be bought, priced around 5-7 euros, and some ciders and sahti available. There was also a food corner with decent-looking and overpriced burgers and snacks available.
Our adventure in SOPP Tampere ended around 7 p.m after ten ”small” ones. The venue puffed up from people from 5-6 p.m. and we had tasted enough by then. All in all, the festival seemed well organized. One piece of nagging, though: the shitty substance of Salmiakki Koskenkorva doesn’t belong to a beer festival. I don’t care who has blended the shit, but it seems pretty awkward to see a waitress dressed like a gypsy tramp walking around the audience selling shots of teenage drinking contest liquid. The contrast between quality beer event and the ”getting totally wasted” kinda booze just struck me in the eye. No, I didn’t buy any, thanks for asking.
Enough with the crap about the arrangements and other miscellanous stuff. Let’s start with my personal top 5 of the few tasted beers – first the brews from #2 to #5 in random order. 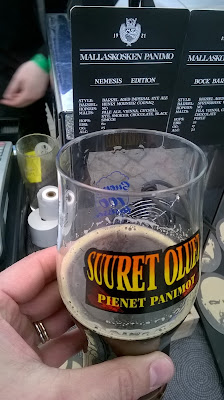 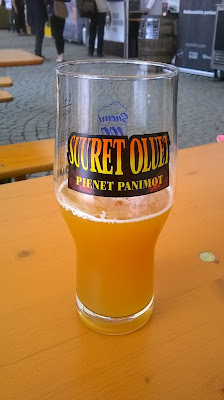 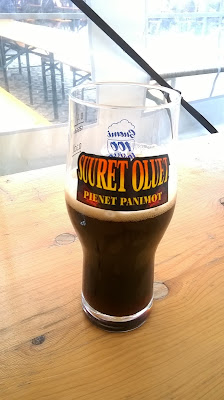 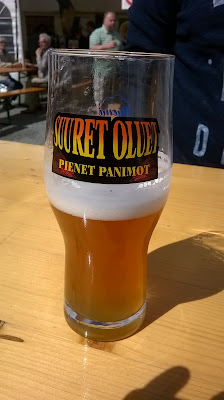 Aroma has yeast, sweet fruits and banana. Taste has yeasty citrus, sweet wheat malts and banana. Finish is fruity sweet. Very nice Belgian-style White IPA – wheat and yeast give the brew some special character.
And then – drum roll – my personal Number One of the event: 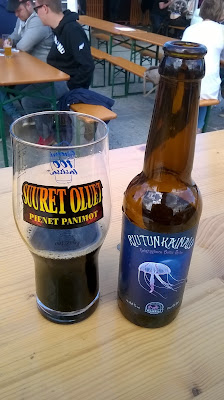 Aroma has sweet roast, black coffee and chocolate. Taste starts with thick and sweet roast. The Belgian yeast shows up, but is drowned under the roast, alcohol bite and chocolate. Aftertaste adds some bitter liquorice. Awesome! Excellent Baltic Porter with a Belgian twist.—
Other good or at least decent brews I had were Hiisi Maailmojen Sota II, Tornion Panimo Pilsner and Beer Hunter’s Mufloni CCCP IPA. The two mandatory misses were Hopping Brewsters Thora (too much berries and ”natural additive” sourness for me) and Ruosniemen Baltic Porter Cuban Coffee Edition (otherwise OK BP but there was an unpleasant side flavour – oldish keg?).