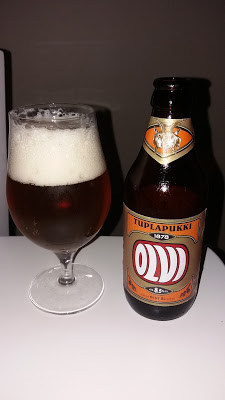 What about the beer?
Colour is clear golden orange with a medium-sized white head. Aroma has sweet malts, grainy caramel and hay. Taste begins with malty over-sweetness. Sugary-boozy sweet malts take over with strange metallic liquorice-essence flavours. Towards the end sharp and minimally fruity booze strikes to side of the metal sweetness. Aftertaste has malty sweetness and alcoholic bitterness.
Yuck. Stingy sweetnees and spiking alcohol, otherwise just some other off-flavours. Gasoline, not beer.
But since this cleaning agent was selected as the Beer of the Month in July 2017 at Olutopas.info*, my taste isn’t probably sophisticated like the more experienced beer aficionados have. More experience, more endurance, more expertise, more confidence, they say. And then you start to taste the qualities of an actual doppelbock or – Devil forbid – even barley wine in this crap. Next correct address would be the rehabilitation clinic, if the poor alcoholic bastard could understand what’s best for him.
In addition, this beer has been the most sold beer in Alko** stores for years and one of the most ”returned from Estonia” beer by Finnish alcohol tourists, so there’s clearly something wrong with my sense of judgment. Probably it’s simply that I still have one. I’ll have to try again when there is realistic potential for some noticeable development, that is: at earliest in 2030.

Even though there’s metal or even cold steel in the flavour, there’s no balls here. So I won’t put anything from Teräsbetoni here. It’s pure camp but this asks something much more shitty and much more popular. Something that shows losing one’s hearing the same way that enjoying a bottle or a can of Tuplapukki shows losing one’s ability to taste and smell stuff.
If there is Hell, forcing me to listen this so-called song played on repeat over and over again would fit my worst nightmare of eternal torture. No, this is not what Finnish music should be known from. Neither should Finnish beer be known from Olvi Tuplapukki.
Mamba: Lauantai-ilta (YouTube)
From the 1986 album Lauantai-ilta, the song was written by Tero Vaara.
* The Finnish Beer Guide. Rating, information and forum site of Finnish beer drinkers/enthusiasts. The forum is a good place to share information and experiences about beer. Beer of the Month is selected by the registered site users.
** Finnish alcohol monopoly. Resembles Sweden’s Systembolaget and Norway’s Vinmonopolet with the difference, that Alko sucks ass compared to it’s Scandinavian colleagues.